Site progress as of May, 2022
View More Construction Updates
Connect with Us ×

The booming real estate market in the Phoenix metro area is enticing homeowners to downsize to exciting new lifestyles.

“We are getting calls from more people seeking upscale large homes in the area, but the product is not there,” says Frank Aazami, a real estate professional with the Private Client Group of Russ Lyon Sotheby’s International Realty, in Scottsdale. “Luckily, some sellers are taking advantage of the hot market, doing what we call ‘right-sizing’ into something smaller.” Wayne and Pencie Culiver, for example, put their 4,000-square-foot homeinaNorth Scottsdale countryclub community on the market after they decided to move to Mirabella at ASU, a Life Plan Community on Arizona State University’s campus in Tempe. They sold it for their asking price in less than 30 days and had to rent an apartment for several months until their new home was ready. JonathanScott and his family are trading an 8,000-square-foot vacation home in Paradise Valley for a villa less than half that size in Ascent at The Phoenician®, a Luxury Collection Resort, Scottsdale.

Replay Destinations, a real estate development company based in Vancouver, British Columbia, with luxury properties around the world, spent a year designing Ascent at The Phoenician, a community of 195 villas and condominiums on land adjoining the iconic Phoenician Hotel.They broke ground last November, and the first villas will be ready for occupancy in spring of 2022.

Todd Patrick, Replay’s vice president of marketing and sales, says, “When we began the reservation system for our initial 30 villas on the first fairway of he Phoenician Golf Course, 20 of the homes were immediately reserved. We knew that we’d attract seasonal buyers who love staying at The Phoenician Resort and want to spend more time in the area. But we were surprised that half our early buyers already live within 20 miles of our property.”

Scott, whosemain home is a ranch in Sheridan, Wyoming, says that owning a large winter escape property in Arizona “was lovely whilewewere there, but too much to maintain. We think a threebedroom villa at Ascent will be a better investment. You could not find a better spot to spend the winter. We will be right in the middle of everything we want: outdoor activities and mountain views, plus access to the great restaurants of Scottsdale, the amenities of The Phoenician and the stores of Fashion Square Mall, all within 10 minutes of the airport.”

The Phoenician, built during the 1980s, was purchased by Host Hotels & Resorts in 2015 and received a $90 million, three-yearmakeover, including the newly constructed Athletic Club and 38,000-square-foot spa.The resort, known for its views of Camelback Mountain, now includes redesigned interiors and guest rooms, revamped pools and golf courses, plus a new three-level spa and a two-story Phoenician Athletic Club. Residents of The Ascent at The Phoenecian will be offered an opportunity to join The Phoenician Amenities Access Program to use the resort’s redesigned amenities, such as its spa, tennis and sports courts, and golf courses.

Replay Destinations is developing Ascent at The Phoenician in stages and had designed the Golf Villa homes before the pandemic. “Ranging from two to three bedrooms, plus den, most of the homes have a flex space that can be used as a den, wine cellar or even a kids’ bunk room,” Patrick says. “With COVID-19 and people working more remotely, most buyers plan to use that room as a home office.” Each villa has its own garage, indoor-outdoor living spaces and upper level decks with views of the golf course and nearby mountain. Villa prices range from $1.5 million to $2.8 million.

The second stage will be a condominium building at the base of Camelback Mountain, featuring one- to threebedrooms plus den residences, adjacent to the future homeowners’ private pool and fitness amenities. Prices will range from $1.5 million to over $4 million.

Patrick says he now understands why the Ascent Villas are so popular with local residents: “They tell us they are looking for resort living, but want to stay in the area and continue their friendships and lifestyles.”

New Neighbor Coming Next to Phoenician
READ NEXT 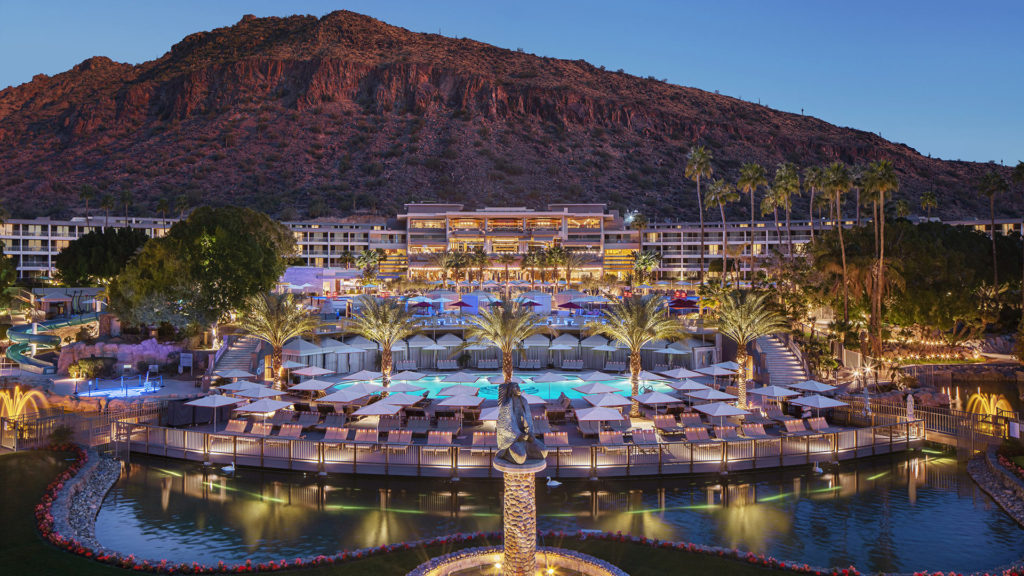 Luxury Homes Selling Quickly at The Phoenician, in 'Snooze-You-Lose Market'